Session 1
Somewhere in the hinterlands of feudal Edo-period Japan, a meteorite made of mysterious dark stone has landed in the nearby mountains. The stone can be forged into weapons and used to perform magic, but it seems to have opened a door to monsters once believed mythical, and prolonged exposure slowly warps its users. Society in this localized region has all but collapsed into chaos. Landowning families have largely retreated into their hereditary fortresses, and the countryside is filled with soldiers and criminals, all traveling in search of opportunity, gold, and dark stone.

Two companions set off on an adventure of their own - the Kitsune, a fox spirit and former guardian of a Water Temple, and the Courtesan, a skilled entertainer bearing a personal letter from the Emperor, thanking her for the afternoon she participated in a tea ceremony at the Imperial Palace, that she hoped would help keep the pair safe on the road. They first set off to investigate a fortress that had gone dark, its fields abandoned, its lanterns left unlit.

The pair entered the fortress, with the Kitsune carrying their lantern to try to hold back the darkness. Courtesan peeked into the next room. Kitsune began searching for evidence of whatever crime had befallen the place. She found a small purse of coins ... and bloodstains and a fleeting shadow that unsettled her. She drew out her ornate comb to smooth her fur and sooth her nerves.

They passed into a dojo, the floor covered with scattered salt. The cubbyholes along the walls were filled with smashed salt blocks, buckets of the stuff were overturned. All of it was mixed with dirt and sand, useless to try to collect. As the pair stooped down though, the moonlight coming in through a hole in the roof was broken up by the shadows of a flock of tengu flying overhead. Fortunately, the flock flew on without landing.

In the next room the far wall was half-filled by a massive statue of some religious icon, a large man that neither of them recognized. The Courtesan had never been a religious woman, and the Kitsune was only familiar with her fellow spirits. As they crossed the room, the shadows seemed to twist with malevolence. While they watched those, they were somehow ambushed by an enormous slug that towered over both of them. The slug reared over them, its thick coat of slime and mucus dripping onto them, but the Courtesan's hidden dagger and Kitsune's kama knives quickly ended its life. Kitsune lamented that no salt had been recovered to use against the pest. Searching the room afterward, Courtesan found dark stone, and Kitsune found a magical Ring of the Yamabushi, which she placed on her finger. 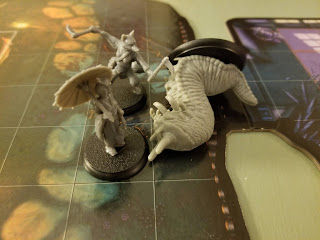 They continued down a hallway where the ceiling collapsed onto them. Kitsune dodged out of the way, but Courtesan was showered with debris, and needed to pause to bandage her wounds. They passed through another hall and into a courtyard where a curse was painted on the floor. An undead goryo, dressed and painted like a kabuki actor snuck out of the shadows and ambushed them. This fight was harder, but the Kitsune's blades struck true, shredding the creature's costume and sending it back to the underworld. In this room Kitsune found dark stone and the Courtesan located a bag of gold dust. 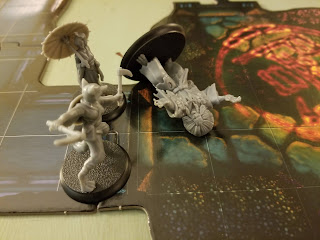 After the fight, the Courtesan was briefly possessed by an angry spirit, cursing the brutal end of its too-short life. Kitsune brought out her ornate comb, and ran it through her friend's hair while speaking words of comfort and encouragement. "There there," she said, patting Courtesan twice on the shoulder, "there there." They both felt a growing sense of dread as the ominous circumstances began to weigh on them.

They next entered a garden courtyard. It was decorated for a party. At last! A clue to show the pair that they getting closer to learning the fate of the palace's inhabitants! Kitsune's quick eyes spotted a secret passage in the wall, but the pair declined to enter it. She also found a pot of soup, somehow still simmering over hot coals. They each ate a small bowl and felt refreshed. Whatever had happened to the residents, it wasn't poison.

The fortress echoed with hideous laughter as they passed into the next room, another training dojo. In the far corner, they spotted a statue of a temple dog come to life and fought against it on mats meant only for practice and trial combat. The stone statue shrugged off most blows, but Kitsune used water magic to deflect one of its own attacks back on itself, turning the tide of battle. Hidden in the dojo, Kitsune found a Yambushi's charm, and Courtesan located a few ingots of gold. 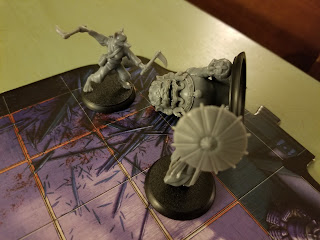 At last they entered the palace's audience chamber. They realized that the fortress's residents must somehow have tried to contact the denizens of an Other World. Every creature the pair had encountered so far came from the Forest of the Dead, a decaying and mist-filled afterlife. A demonic brand burst into flames on the floor, and three crowds of swirling ghosts poured through the gaps in the hastily boarded-up back door. So this was the fate of the fortress's inhabitants! Either slain by spirits or become them. Rather than risk fighting on the burning floor, Kitsune and Courtesan lured the spirits back into the dojo. They were outnumbered and outmatched, with the ghosts seeming to draw strength from the pair's own cunning and spirituality. Although they banished one angry horde of ghosts, the other two knocked the Courtesan unconscious and cast her aside. The Kitsune's water magic helped her hold out a while longer, but soon she too succumbed to the darkness. 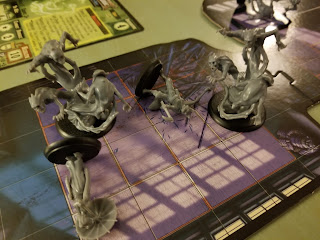 When the pair awoke, the spirits were gone. The fortress was still ruined, but now empty. The Kitsune's leg was injured, and the Courtesan's collarbone ached. Both felt corrupted by the unsettling evil that permeated the place. They resolved to travel to a feudal village to seek medical help, and perhaps hire some assistants, before setting out on their next adventure.


Losses
Kitsune and Courtesan were both knocked out and injured.
Because the final spirits were not defeated and no survivors were rescued, the mission was a failure.


Commentary
I've played a different version of Shadows of Brimstone before with another friend, but this was my first time as the more experienced player guiding a novice through the game. Technically, Shadows has no game master or referee, but I took responsibility for knowing the rules a little better. Since I often run D&D for relatively novice players, this wasn't such an unfamiliar situation for me to be in. I did make a couple mistakes which I'll correct next time, but overall, I thought it went well - even though we got TPKed at the end.

The gameplay in Shadows is mostly cooperative, but the acquisition of stuff is competitive. Searching a room outside of combat is a solo activity, and the searcher gets to keep whatever they find. After a battle, all players get loot, but again, it's random and individualized. Experience awards come from simply hitting monsters size Large or larger, but only from delivering the killing blow for smaller enemies. Other ways to gain XP include searching rooms, healing others characters' injuries, and casting magic spells. Among the things that account for our uneven XP awards, Emily's character staying alive for another couple rounds of combat netted her quite a bit of experience, even though she was unable to survive the ghosts.

This is a game that requires a lot of pre-play preparation in terms of punching out cardboard tokens; cutting out, assembling, and gluing plastic minifigures; and sleeving and sorting all the cards that come with. The benefit of all that is that it's very good looking, and card draws replace a lot of what would random table rolls in D&D, which both lets the game run without a GM, and probably facilitates the individualized treasure and experience point awards.

What you give up is some of the opportunity for playing the role of your character, and some of the tactical freedom to address the various tableaus you encounter. Simply ignoring whatever it is generally is not an option.

The fact that all the monsters came from the Forest of the Dead was a total coincidence, but it helped create a slightly coherent narrative out of the evening's events, and it suggests that for this campaign, we might focus on the Forest as our primary Other World-ly adversary. The ghosts were a particular bit of bad luck. Some of their combat stats are based on your characters' skills, and ours had high values in just the right places to tip this fight from difficult to impossible. If we are going to fight these things again, we'll need better weapons, and maybe an expendable hireling to help out.