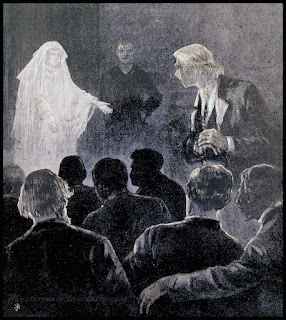 "In the earliest days, you would sit down with a medium at a table, and you would start asking questions out to the ether. And these raps would signal 'yes' or 'no' in a simple binary code. In the emerging Spiritualist movement, new mediums started calling out the alphabet, letter by letter, to the rapping ghosts and thereby, spelling out words and sentences from beyond in an excruciatingly slow manner. But ingenious Victorians quickly started looking for ways to get the message faster, coming up with all sorts of means and devices to chat with the dead.

Laypeople experimented with these devices at home, others turned to Spiritualist mediums, a job that eventually gave young women - who were thought to be so receptive to the divine they would come to embody the spirits themselves - power they couldn’t have dreamed of before. For a working-class woman who becomes a medium and ends up hanging out in wealthy people’s living rooms her entire career, it was an opportunity for another kind of life.

It was also an opportunity for women to speak in fora that they usually didn’t have the opportunity to speak in. These mediums were able to flagrantly violate strict Victorian social taboos and speak unpopular or radical opinions. Saying their ideas came from a higher power gave mediums substantial influence over social and political beliefs: They could inject ideas about poverty, women’s suffrage, domestic violence, or the abolition of slavery into the public consciousness." 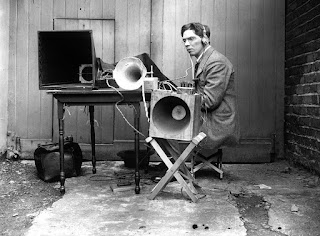 An Occult History of the Television Set
Geoff Manaugh
Gizmodo

TV in a long line of other optical media go back at least as far as weird Renaissance experiments involving technologically-induced illusions, such as concave mirrors, magic lanterns, disorienting walls of smoke, and other ghostly apparitions and phantasmagoric projections created by speciality devices.

These devices included instruments specifically designed for pursuing supernatural research - for visualizing the invisible and showing the subtle forces at work in everyday life. So, while the television itself might not be a supernatural mechanism, it nonetheless descends from a strange and convoluted line of esoteric experimentation, including early attempts at controlling electromagnetic transmissions, radio waves, and even experiencing various forms of so-called remote viewing." 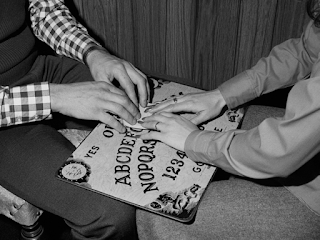 "The Ouija board came straight out of the American 19th century obsession with spiritualism, the belief that the dead are able to communicate with the living. Spiritualism reached millions of adherents at its peak in the second half of the 19th century. It was compatible with Christian dogma, meaning one could hold a séance on Saturday night and have no qualms about going to church the next day. It was an acceptable, even wholesome activity to contact spirits at séances, through automatic writing, or table turning parties, in which participants would place their hands on a small table and watch it begin shake and rattle, while they all declared that they weren’t moving it.

As spiritualism had grown in American culture, so too did frustration with how long it took to get any meaningful message out of the spirits. Calling out the alphabet and waiting for a knock at the right letter was deeply boring. After all, rapid communication with breathing humans at far distances was a possibility - the telegraph had been around for decades - why shouldn’t spirits be as easy to reach? People were desperate for methods of communication that would be quicker - and while several entrepreneurs realized that, it was the Kennard Novelty Company that really nailed it." 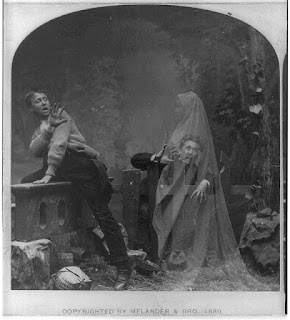 "For Mumler photo manipulation was also good business. While he was ultimately selling nostalgia and comfort, what was he technically selling were portraits of clients posed alongside the "spirits" of their deceased loved ones. He sold those for between $5 and $10 apiece, a huge fee at the time. He grew wealthy producing spirit photos for grief-stricken clients who had lost relatives in the Civil War.

Which was ingenious and cruel at the same time. Visual memories, even those of loved ones, fade. Images blur. Lines soften. Mumler took advantage of this. If a customer shared enough information with the photographer, and if the selected face was faint and blurry enough, the resulting 'spirit' could convince a person who wanted to be convinced.

The mid-19th century in the U.S. coincided with the rise of Spiritualism, the religious movement that posited, among other things, the possibility that a soul could exist without a body to contain it. Technologies like the telegraph and the camera gave cultural aid to the Spiritualist movement by effectively separating messages from the bodies of their senders. Images were disentangled from their subjects; information was disentangled from its sources. Ghosts were, in their way, everywhere." 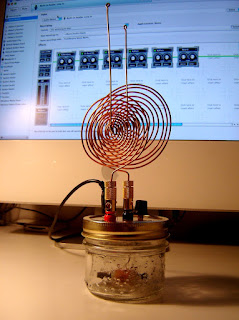 "My first observations positively terrified me as there was present in them something mysterious, not to say supernatural, and I was alone in my laboratory at night.

The sounds I am listening to every night at first appear to be human voices conversing back and forth in a language I cannot understand. I find it difficult to imagine that I am actually hearing real voices from people not of this planet. There must be a more simple explanation that has so far eluded me."

Email ThisBlogThis!Share to TwitterShare to FacebookShare to Pinterest
Labels: miscellany