Resurrection of Wormwood - Warlock Mentor - Anshall of the Spirits

Your mentor is Anshall, a spirit medium who channels the voices of the dead to provide comfort to the grieving, and taught you to channel a god. Your class is warlock. 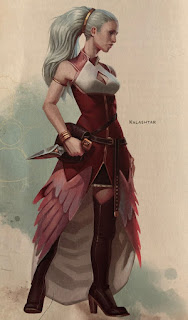 Anshall is a foreigner from across the Darkling Sea, a woman with pink skin and white hair whose native garb is decorated with insect motifs. Anshall believes in a spirit world, where the ghosts of the dead lie dreaming, and she claims an affinity with these spirits. Many shun Anshall as a heretic and eccentric, but others pay her to conduct séances, where she speaks with the dead to temporarily reconnect families separated by the plague.

Anshall taught you mediumship and channeling. She showed you a glimpse of the spirit world, where her soul appeared to you as an alien insect. Anshall trained you to contact an otherworldly god, to supplicate and beseech it, to swear a pact to become its avatar in the mortal realm.

If you are the first player to train with Anshall, select a vacant building on the town map and label it as "House of the Spirits".


You are a warlock. You know the spells eldritch blast and hex.

You have leather armor, two daggers, and a scholar's pack. You own a memento portrait of your dead fiancé, who you have never been able to contact during a séance. You also own a mask of your patron god's face, which you wear while channeling their power.


d6 How did your fiancé die, and what otherworldly vista did you glimpse when Anshall showed you the spirit realm?

1 Your fiancé died of plague. You saw the Tombstone Stairwell, where the souls of the dead descend endless engravened stairs down into the spirit world. You know the spells minor illusion and unseen servant.

2 Your fiancé starved to death in a plague house, locked in for quarantine with too little to eat. You wept before the Alabaster Gates, where the doors were locked, where every soul was turned away, the innocent and the unrepentant alike. You know the spells mage hand and protection from good and evil.

3 Your fiancé died while traveling - sleepless, lost, exhausted - when no one would open their door to aid a stranger. You saw the Grey Wastes, where each soul wanders alone through a faded afterimage of the living world, empty and devoid of life. You know the spells friends and witch bolt.

4 Your fiancé was killed by bandits, beaten and abandoned alongside the road. You turned away from the sight of the Inverted City, the place of all demons, where human spirits were helpless before their tormentors, tossed about an tortured like playthings. You know the spells blade ward and hellish rebuke.

5 Your fiancé died of exposure, traveling through the rain on a cold winter's night. You stared into the Frozen Lake, where the loneliest souls are imprisoned in isolation, far from the warmth of others' love. You know the spells frostbite and charm person.

6 Your fiancé died by ingesting false medicine, deceived by poison disguised as panacea. You watched the Transmigration of Souls, where the ancient dead finally escape the spirit world to be reborn as living infants. You know the spells poison spray and comprehend languages.

What was your fiancé's name? What business called them to travel to the distant city so often? As a complication, your game master may rule that an ongoing adventure involves completing your fiancé's unfinished business.


d6 Which otherworldly patron did Anshall teach you to channel?

1 You knelt in fealty at the court of the Umbral Queen, the raven-haired sovereign of the shadowed realms, who wears a crown of knives, who is cloaked in a gown of swords. In time, the Queen will send one of her umbral knights, a tiny raven-winged humanoid, dressed in autumn leaves, wearing a bird's skull as a mask, to serve as your familiar (as imp).

2 You bowed your head in prayer to the celestial Archangel of the Bell Choir, who rings out a song of resistance against the plague and the rule of the Plague Lord. In time, the angel will send you the apocryphal Gospel of Lazarus, a prayer book that teaches the spells guidance, resistance, and thaumaturgy.

3 You raced along footpaths through the trees behind the fey Daughter of the Dreaming Forest, as she lead a wild hunt through thickets of memory and groves of deceit. In time, she will send you Trumvaldbuch, a book of fairy stories illustrated with ambiguous inkblots, that teaches the spells druidcraft, primal savagery, and thorn whip.

4 You wandered lost through crooked streets to find the Architect of All Mazes, a great elder from the Abhorred Cosmos, who looks like a fractured reflection in a shattered mirror. In time, the Architect will send you a crooked cormorant, like black bird viewed through broken glass (as pseudodragon).

5 You descended to the bottom of abyssal waters to reach the Avanc of the Depthless Fathoms, a miles-long serpent lurking in the deep, whose slumber stirs gentle the tides, whose thrashing roils typhoons and floods. In time, the Avanc will send you a manuscript in a bottle, Voyage of the Arathustra an account of a failed expedition to the polar ice that teaches the spells infestation, ray of frost, and shape water.

6 You opened your mind to accept Concept of the Stellar Wind, an immortal entity representing the idea of undying light blowing across the void of the outer dark. In time, your patron will send an allegory of photon, a tiny insect-winged humanoid made of golden light, to serve as your familiar (as sprite).

Select a vacant building on the map and label it as your patron's place of power - the House with Black Walls, the Church of the Bell Choir, the Floral Greenhouse, the Crooked House, the Drowning Well, or the Stargazer's Observatory. As a complication, your game master may rule that an ongoing adventure requires an additional task requested by your otherworldly god.


Designer's Commentary
When Jack Shear published The Liberation of Wormwood, I thought he'd come up with a remarkably flexible framework for combining random character generation with co-creation of the campaign setting with an overarching campaign goal that players could pursue in a variety in ways. It occurred to me at the time that rather than the town of Wormwood being conquered by a Usurper and their army, that the whole region could be oppressed by the personification of plague, who could eventually be overthrown by sufficiently ambitious adventurers.

I didn't do very much with this idea when I first had it, besides jotting down some notes about possible Plague Lords and some potential ideas for character and setting creation. But recent events have gotten me thinking about the idea again.

The idea behind Anshall is to provide a different, hopefully Gothic-seeming, interpretation for warlocks and their powers.

Email ThisBlogThis!Share to TwitterShare to FacebookShare to Pinterest
Labels: 5e, characters i want to play, grotesque & dungeonesque, resurrection of wormwood