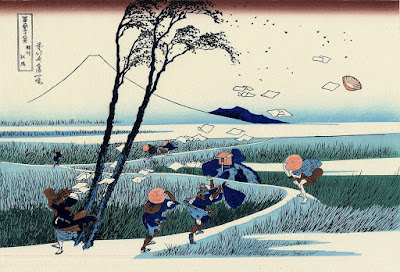 "During Hokusai’s lifetime, Japanese were barred from leaving the country, on pain of death. But the country was not totally closed. Some foreign goods could come in. And some foreign techniques, too. Do you see, here, how the traveler in the back is so much smaller than the woman who’s lost her papers? And how sharply the landscape slopes up? A hallmark of Renaissance image-making. Hokusai was among the first Japanese artists to employ Western perspective, though he used it playfully. Hokusai would have picked up this perspectival technique from Dutch prints circulating in Edo, even as elsewhere, in the same image, Hokusai employs a perspectival technique common in Asian painting, with similarly sized figures positioned along diagonal sightlines. That, too, was imported knowledge, absorbed from Chinese examples into earlier Japanese painting."

"In 1867, the World’s Fair took place in Paris. Japan participated for the first time, and displayed coats of armor, swords, statues - and woodblock prints. The French went wild. A critic at the fair singled out Hokusai. What these young moderns loved were the prints. Hokusai’s example would soon influence the work of Paris’s modern artists. Mary Cassatt, for instance. She learned from Japanese printmakers to create spaces of blocky color, with hard transitions from tone to tone. Or her friend Edgar Degas, whose flat and asymmetrical spaces channel the Japanese model into the opera house and the ballet studio. These Parisians understood the prints they were looking at only in part. They made foolish, patronizing generalizations."

"Like most fantasies, 'Japonisme' said more about the fantasizer than the fantasized. These Parisians, defeated in war and rocketing through industrialization, saw themselves in landscapes that were both ageless and adrift. And Hokusai, who’d already metabolized Western technique into his images of Japan, was the perfect vessel for their dreaming." 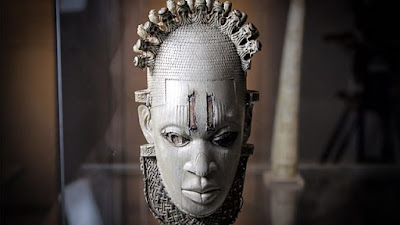 "In the 15th and 16th centuries distant and disparate cultures met, often for the first time. These encounters provoked wonder, awe, bafflement and fear. Art was always on the frontline. Each cultural contact at this time left a mark on both sides: the magnificent Benin bronzes record the meeting of an ancient West African kingdom and Portuguese voyagers in a spirit of mutual respect and exchange. By contrast we think Spain's conquest of Central America in the 16th century as decimating the Aztecs and eviscerating their culture. But even in Mexico rare surviving Aztec artworks recall a more nuanced story."

"The Tokugawa Shogunate, after an initial embrace, became so wary of outside interference that they sought to cut ties with the outside world. But in their art, as in their trade, they could never truly isolate themselves from foreign influences. By contrast the Protestant Dutch Republic was itself an entirely new kind of creature: a market driven nation-state. It was a system that created new freedoms and opportunities. The British in India: at first the British were as open to foreign influence as the Dutch. But by the 1800s they became more aggressive and the era of encounters gave way to the era of muscular empire, that was dismissive of India's arts and cultures." 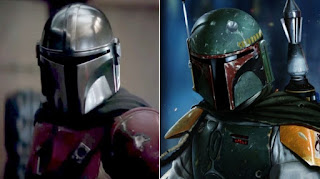 "A cultural practice or cultural expression is a mode of behavior, communication, or self-assertion with origins or close associations with a certain culture. Either internal factors or external factors may form those associations. Cultural exchange is one culture’s adoption of cultural practices or expressions originating with another culture. We’ll call the former culture the adopters, the latter the originators. Cultural appropriation is an instance of cultural exchange which aggravates, entrenches, trivializes, or mocks a power imbalance between an enfranchised adopter and a systemically oppressed originator. An instance of cultural appropriation may also have positive or benign effects - for the originator, the adopter, or third parties - which exist in parallel to the appropriative dynamic."

"What’s the context? What does it look like without that context? What power dynamics differentiate adopters and originators? What’s the connection between adopter and originator? What’s the tone? Who feels hurt, and why? Where I hope this analytical strategy takes us is the complicated places. Where expressions are simultaneously racist and anti-racist. Where different subaltern groups borrow from each other along intersectional gradients of power that leave each group empowered over the other in a different way. Where there’s contradiction, harm and help given and taken simultaneously, or long histories of borrowed expressions becoming the adopter’s cultural signifiers. The most complex, challenging questions of cultural appropriation concern marginalized groups exchanging culture with one another." 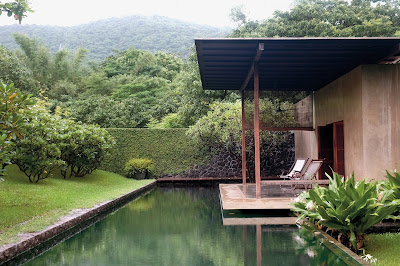 This is an Indian House, According to One Architect
Aatish Taseer
New York Times

"Indian architecture was effortlessly palimpsestic, a place on which layer upon layer of thought and reverie had been inscribed, and yet no succeeding layer had completely hidden or erased what had been written previously. India's oldest stone buildings are stupas and rock-cut caves of Buddhist origin. These were preceded by an older tradition of building in wood. When Buddhism declined in India, and resurgent Hindu faith rose, it was the ghost of Buddhist architecture, visible in both the apsidal shape of certain temples and in the use of stone-latticed windows, that was resurrected in a new tradition of Hindu temple architecture."

"With the coming of Islam, many features of Indian building, such as screens, carved brackets, corbeled arches and deep eaves projecting hard black shadows, became part of Indo-Islamic architecture. Dynasties rose and fell, the religious makeup of India changed, but Indian architecture, like Indian food, music and literature, was able to absorb the new influences."

"The English writer Robert Byron makes an important distinction between what he describes as 'fusion' and 'allusion'. The first is the use of diverse architectural inventions and ornamental themes, whatever their dates or racial origins, simply for their practical value in creating and artistic unity and in giving effect to the values of mass, space, line and coherence in the whole design. The second is the use of these same inventions and themes in a mood of reminiscence regardless of their relevance to mass, space, line and coherence." 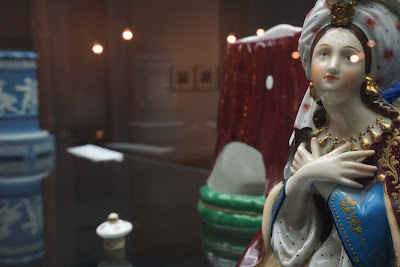 "A whole new order is proposed, one that does not care about an artwork’s uniqueness, a dress’s elegance, or an artifact’s fine condition. What matters here is movement - how objects and forms circulate through time and across the globe."

"Here’s an example: Two pieces of blue-and-white pottery are on display - a vase ringed with Persian script and a porcelain dish decorated with Chinese characters. They both date from around the late 16th century. But it turns out that the 'Persian' one was made in China, while the 'Chinese' one comes from Iran, and on both of them the characters are nonsense. Their meaning lies not in the gobbledygook written on their surfaces, but on the trade routes they map and the relationships they signify."

Email ThisBlogThis!Share to TwitterShare to FacebookShare to Pinterest
Labels: miscellany