Those aren't the only non-standard dice types in DCC though. There's also d24 and d30. When should you get a critical hit with them?

The rules don't specifically say. All giants in DCC use d24 attack dice, and crit on any roll of 20 or higher. (This gives them about a 21% chance of a critical hit on each attack!) But that's a special ability that's explicitly called out in every giant's monster stats. So I don't think player characters should get the exact same benefit from rolling a d24.

On the other hand, I don't think players should only be limited to critting on a roll of 24 on a d24 or 30 on a d30. The chance of a fumble on those dice goes down (to around 4% and 3%, respectively) but I think the chance of a critical hit should go up. The fun of rolling a larger dice should be accompanied by the fun of a better chance at critting. So how do we accomplish that?

If you're using the rules for fleeting luck, I would be happy to say you earn a temporary point of Luck on any roll of 20, 24, or 30 as well. 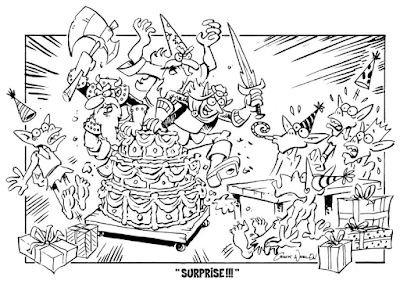 How should this interact with the larger dice types? I would say that a warrior still gets their expanded crit range, and the extra chance from using the larger dice, but doesn't get to expand their range any further. So a 1st level warrior rolling a d30 gets a critical hit on a 19, 20, 24, and 30, but not on a 23 or a 29. Their chance of critting improves to around 13%, but not to 20%.

The reason is more clear at higher levels. If we allowed a 9th level warrior to increase their crit range on each new dice, then on a d30, they'd score a critical hit on any roll from 17-24, and again from 27-30, a 40% chance of a crit! This would make rolling a 25 or 26 weirdly disappointing. It would also take away some of the fun of critical hits, which is that they're unpredictable. You never want to expect crits so regularly that you become disappointed when you don't get one. I like critical hits, and for me, having them happen almost half the time would ruin one of the things I like about them.

Email ThisBlogThis!Share to TwitterShare to FacebookShare to Pinterest
Labels: dcc, mechanics i want to use