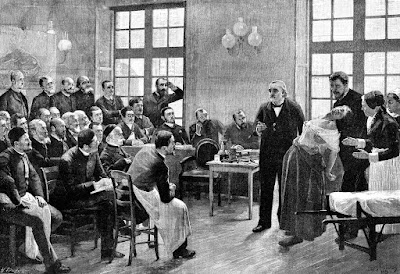 "Control is a coveted possession. The mesmerists and skeptics all seem to want it; at any rate, they want to consider themselves rational and self-possessed enough not to fall under anyone else’s. During this brief, strange moment, mesmerizing another person - or seeing someone get mesmerized, or denouncing mesmerists as charlatans - became a way of stockpiling control for one's own use. At whose expense? Unidentified, enslaved West Indian laborers planters tried to mesmerize; female factory workers."

"Mesmerists made gains in America not by denying that they exploited credulous subjects but by advertising that they had found a new technique for doing precisely that. Once calling people 'credulous' emerged as a way to justify singling them out as test subjects, mesmerists could compete over experimenting with, and hoping to control, the credulity of others. They became businesslike experts in the profitable arts of human manipulation. Two of mesmerism’s early adopters were plantation owners and factory managers." 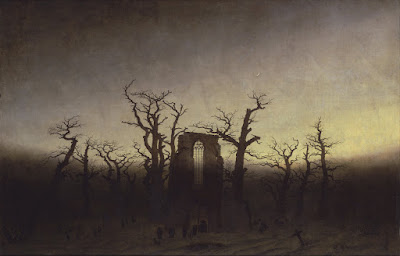 "The initial impetus for the Gothic in art and literature stemmed from the marginalization of medieval forms by bourgeois relations and industrialization. The Gothic castle and the abbey stood in ruins, projecting both a nostalgia and fear of the past - things that were lost but also alien and threatening to modern life. This dynamic is the cultural echo of combined and uneven development. The hard fought autonomy of the small businessman is destroyed as capital is consolidated in larger units. 'Self-made men' are proletarianized - as far fewer proletarians become 'self-made men.' In the process thousands of little gothic worlds are created. In the shells of factories, in the empty union halls, in the empty mansions of declassed small capitalists, in the photographs of failed revolutions and in the broadsheets of all but forgotten sects." 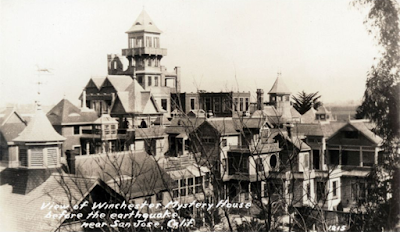 "Sarah Winchester had inherited a vast fortune off of guns. She built her house with shifts of 16 carpenters who were paid three times the going rate and worked 24 hours a day, every day, from 1886 until Sarah’s death in 1922. Winchester wove and unwove eternally. She built, demolished and rebuilt. Winchester hastily sketched designs on napkins or brown paper for carpenters to build additions, towers, cupolas or rooms that made no sense and had no purpose, sometimes only to be plastered over the next day."

"Her building is a ghost story of the American gun. Winchester became terrified that her misfortunes, especially the death of her husband and one-month old daughter, were cosmic retribution from all the spirits killed by Winchester rifles. A medium told her that she would be haunted by the ghosts of Winchester rifle victims unless she built, non-stop - perhaps at ghosts' direction, for their pleasure, or perhaps as a way to elude them. Haunted by conscience over her gun blood fortune and seeking either protection or absolution, Winchester lived in almost complete solitude, in a mansion designed to be haunted." 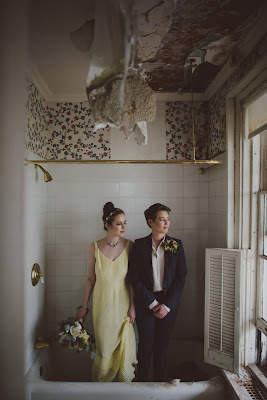 "About half of all marriages end up in ruins. A few start out that way. For some couples, abandoned buildings - train stations, warehouses and century-old churches, often found in declining or deindustrialized cities - are proving the perfect haunting aesthetic for their weddings."

"Logistically one of the biggest issues is that a lot of these buildings don’t really have addresses anymore. Ruins also change or sometimes disappear altogether."

"This method of gazing at such areas of a city doesn’t always examine the larger social and economic forces taking place in cities. Still, the forlorn sense of isolation sparks curiosity for some couples, along with a desire to bring former functions back to abandoned structures, even temporarily, as a way to honor them." 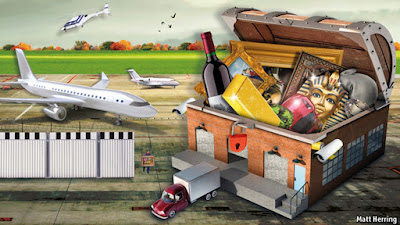 Uber-Warehouses for the Ultra-Rich
The Economist

"The world’s rich are increasingly investing in expensive stuff, and 'freeports' are becoming their repositories of choice. Their attractions are similar to those offered by offshore financial centres: security and confidentiality, not much scrutiny, the ability for owners to hide behind nominees, and an array of tax advantages. Because of the confidentiality, the value of goods stashed in freeports is unknowable. Though much of what lies within is perfectly legitimate, the protection offered from prying eyes ensures that they appeal to kleptocrats and tax-dodgers as well as plutocrats. The goods they stash in the freeports range from paintings, fine wine and precious metals to tapestries and even classic cars."

"The early freeports were drab warehouses. But as the contents have grown glitzier, so have the premises themselves. The idea is to turn freeports into places the end-customer wants to be seen in, the best alternative to owning your own museum. The newest facilities are dotted with private showrooms, where art can be shown to potential buyers. The wealthy are increasingly using freeports as a place where they can rub shoulders and trade fine objects with each other. It is not uncommon for a painting to be swapped for, say, a sculpture and some cases of wine, with all the goods remaining in the freeport after the deal and merely being shifted between the storage rooms of the buyer’s and seller’s handling agents."