I Shall Destroy all the Civilized Stretch Goals!

I previously mentioned that I will maybe be writing a DCC patron, depending on the result of a crowdfunding campaign.

The campaign is Joshua LH Burnett and Leighton Connor's adaptation of Fletcher Hanks' golden-age comics into a DCC setting with multiple adventures, titled for the villains of one of Hanks' strips, The Leopard Women of Venus.

At the time I'm writing this, the campaign has about three days left. It'll end early morning on Thursday, November 21st. The campaign has received enough pledges to fund, and barring a catastrophe, in the next 72 hours it will receive enough pledges to commission Stephen Poag, who's art has become almost synonymous with DCC and the OSR more generally.


Josh recently ran one of these adventures at Acadecon in Ohio, and he published a summary on his own blog. I'm reprinting it here, along with a photo of his judge's map.

"The adventure started with the gathered zeds receiving their mission from Forecastle J. MacBeth, leader of the Humanoid Coalition and my favorite NPC. The party needed to cross through the dangerous jungle to a crater where an alien spaceship had crashed 72 hours previous. They were to salvage what they could from the saucer and find out what had happened to the previous retrieval team."

"The trek across the jungle was treated like a dungeon, with paths connecting to various clearings. No need to overwhelm new players with wilderness-crawl rules right out the gate, I figure. The party encountered a shrine to Fantomah, got the jump on some Martian scouts, fought a deranged Flying Saurian, and avoided the deadly Venusian Bees. Little-to-no casualties at this point, thanks to luck and sound tactics."

"When the party arrived at Gorgon’s Gorge, things started to turn. Three giant flaming claws smashed, squeezed, and burned several members of the party before they were destroyed."

"Eventually the party found the wrecked saucer and set to exploring it. The radium miner’s geiger counter let them avoid the ruptured core at the center of the craft. The Martian cafeteria seemed promising until mutated slime puddings dropped from the ceiling killed several of their number. The sadistic surgical robot the oversaw the bio-lab also managed kill some of the players before getting scrapped. The Martian barracks were the most deadly of course, as a cadre of Martian pikemen and gunners winnowed down the PC party. When they party eventually decided to examine the saucer’s power core, the co-mingled monstrosity that was once two members of the original team killed several more PCs (It had three attacks!). At long last, the PCs managed to rescue the two survivors from the original expedition and were able to call in MacBeth for an extraction. Of the 18 level-zeroes that started the adventure, only seven made it out alive. That’s what I call a good funnel adventure!"


There's another stretch goal still waiting to be funded, and that's the one that determines whether or not I'll be hired on to the project. I remain optimistic, but I thought I could improve my chances by talking about what you'll get if I get involved.

My potential contribution is a patron that plays an important role in the Venus of LWOV, but who could also fit in to a campaign for Mutant Crawl Classics or Crawling Under a Broken Moon. If hired, I'll be writing a patron to act as the leader and benefactor of the Science Robots.


The obvious starting point is going to be Fletcher Hanks' own comics. I was able to read the first collection, I Shall Destroy All the Civilized Planets, through my public library system. Unfortunately, all the Space Smith comics are in the second compilation, You Shall Die by Your Own Evil Creation, so I'll need to ILL a copy straight away. I'll also want to see what Josh and Leighton have written about the Science Robots.

But I do a few ideas of my own already. I know that for some people, the idea of robot immediately conjures up images of Forbidden Planet or Lost in Space or Robot Monster, but personally, I'm much more inspired by Stanislaw Lem and Star Trek ... and by the delightful Futurama homages to them both. 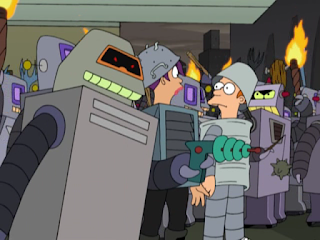 Stanislaw Lem's Star Diaries are among his funniest short stories. They're the voyages of his naif spaceman Ijon Tichy, as he blunders from one situation he's too foolish to understand to another. In "The Seventh Voyage" for example, he basically re-enacts the plot to Timecrimes, minus the horror and the sexual violence, simply because he's too arrogant and too dumb to get out of his own way.

In "The Eleventh Voyage" an Earth government sends Ijon to spy on a robot planet. He wears a suit of armor that disguises him, and consults an instruction manual on robot society to help fit in. In the end, he discovers that all the actual robots rusted away long ago. The entire robot society is made up of spies in costumes, all of whom are too frightened of being caught out as imposters to notice that their neighbors are just playacting too. It's a really powerful condemnation of the Soviet government, and a veiled call for citizens to realize that they're not alone, and to democratically overthrow the one-party government. Aaand, it's a great inspiration for what the Science Robots might be like!

Futurama actually got a couple episodes out of "The Eleventh Voyage" - both Fear of a Bot Planet, where they travel to a robot planet where the incompetent government of robot elders has all the robots spend all day ritually hating humans as a distraction from their crippling lugnut shortage, and Insane in the Mainframe, where a human is misdiagnosed by a robot psychiatrist as being a malfunctioning robot, and eventually comes to believe it. 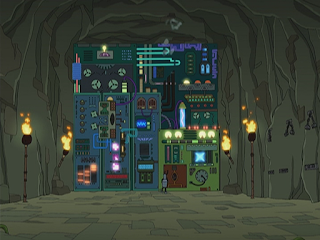 Meanwhile, you can't have a society of robots without a giant supercomputer to rule over them. I mean, okay, you caaan, but why would you want to? One of my favorite things about Star Trek is that Captain Kirk has basically two go-to moves to solve any problem. The first is to seduce an attractive woman, and the second is to make a computer go crazy. And in one notable instance, the woman is a robot, and when he seduces her, that makes her computer brain go crazy. Maximum Derek Kirk! In case I thought I was alone in noticing this, nope, other fans have dubbed this the "induced self destruction" phenomenon. Kirk's third go-to move, incidentally, is the double axe handle punch that apparently his stunt coordinators thought was the most futuristic looking fight move possible.

My favorite giant computer episode of Star Trek was the one that for some reason needed to remove Spock's brain from his body to act as a processor. That one was called, um, checks notes, "Spock's Brain". Futurama has their own giant computer episode, "Amazon Women in the Mood", where it turns out that the giant computer is actually just a robot hiding behind a giant facade, and the robot herself is at least as fallible as the people she governs.

The point being that I imagine the Science Robots are directed by a giant supercomputer, that may or may not be what it appears. It's certainly vainglorious, hypocritical, and despite a possible vulnerability to children's logic puzzles, a deeply illogical entity. The Science Robots themselves probably have profoundly inaccurate misconceptions about humans, and might have a few armor-wearing humans living as members of the Robot caste of their society.

Now, you might say "but Anne, what if the Science Robots are ruled by a GOOD computer?" Let me remind you that the Robots keep humans as chattel, and routinely uplift selected humans to act as military units by injecting them with irradiated cat blood and giving them flamethrowers to wear as hats. While the entity who makes this decision MIGHT have good intentions, and be better than its deeply horrible neighbors, it is certainly NOT a paragon of military strategy or any other virtue.

So those are my personal touchpoints, beyond the works of Fletcher Hanks and the previous writing by Josh and Leighton. If you back the Kickstarter and my stretch goal gets funded, this is the sort of thing you can look forward to from me. You can also look forward to 175-page comic-book sized campaign setting with two other patrons, two introductory adventures, and a plethora of art by OSR luminaries for all your classic dungeon-crawling enjoyment!