In my post about Tolkienian science fantasy, I suggested creating a "french vanilla" setting by replacing elves, dwarves, and hobbits with famous science fiction species.
Today I want to do a little more worldbuilding on that setting by imagining a faction the player characters could encounter. The idea is the same as before - create something that's consistent with the themes and tropes of vanilla fantasy, but replace the usual monsters with species with famous creatures from scifi.
First up is the Empire of the Apes, centered on the ruins of Empire City, located on Skull Island. 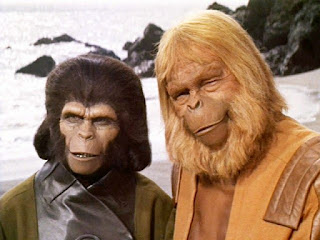 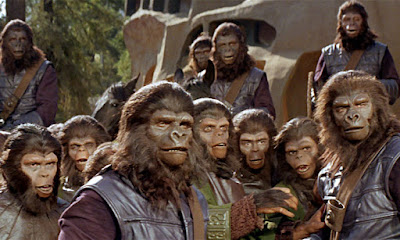 Most citizens of the Empire of the Apes are, well, Apes, from the Planet of the Apes films and tv series. In the films and show, Ape society has a division of labor by species. Orangutans perform the social labor, they're the political and religious leaders, the ones who make and enforce rules and give orders to others. I'd argue it would be logically consistent for them to have caretaking roles as well - taking care of children, the sick, the elderly. Chimpanzees perform intellectual labor, they're scientists and doctors, and arguably anyone who needs to read or write or do math as major part of their job. Gorillas perform physical labor, they're the workers, guards, and soldiers. I like to think that Apes don't divide up any jobs by gender, since they've already got this complex setup related to species.
As NPCs, I would probably just use human NPC statblocks for Apes. I don't see a strong reason for them to have unusual abilities, and their appearance differences are basically cosmetic. If somehow a player wanted to make a PC Ape, I would just stat them up as normal in whatever rule system, let them pick the class, and then suggest that they describe their appearance in terms of the species most likely to have that job. Unless for some reason they wanted to play an Ape who leaves their tribe to pursue an atypical career.
(But Anne, I can almost hear one of you asking me, doesn't that mean that in 5e, with the standard statblock, I could make a weakling Gorilla with 8 STR and 10 CON, maxed-out CHA and only middling INT, and turn them into an ineffectual Wizard, a job that matches neither their species nor their stats? It does mean that, yes. There's nothing stopping you except your own and your fellow players' sense of what's appropriate. If you feel a compulsion to look for things the rules don't explicitly forbid you from doing, to use those things to achieve results that offend your own sense of logic and fairness, and then feel sad about having done so, that's maybe something you should talk with a counselor about, not a constructive basis for gaming criticism.) 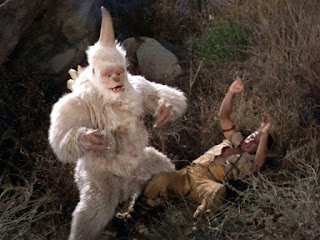 In addition to the majority population of Apes, the Empire of the Apes also has some rarer members. The Mugato from Star Trek have essentially animal intelligence, and are like, pretty common wildlife in the lands controlled by the Empire. Mugato have white fur, a giant horn growing from the tops of their heads, spikes growing down the lengths of their spines, and prehensile tails. They're also venomous, although surely Ape doctors keep vials of the anti-toxin on-hand (or maybe Apes are immune to Mugato poison?)
I would probably treat Mugato as bears by selecting a simple monster in the 3-5 HD range, adding poison to their regular attack, adding a giant horn special attack, and perhaps giving them a defensive bonus from their spine spikes. If you wanted more variety, you could add six-limbed Martian White Apes from A Princess of Mars as a second wild animal that roams freely within the Empire. 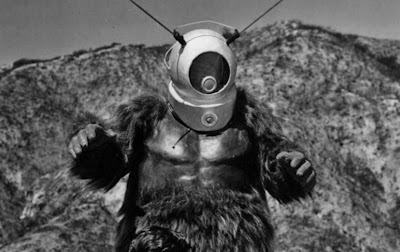 At lower levels, I would make a lone Mugato and a group of soldier Gorillas the greatest military threat the player characters might face. At higher levels though, anyone who stirs up trouble inside the Empire is likely to encounter a crowd of Mugato led by this guy, the Robot Monster from the mvie Robot Monster. The robot monster has the body of a giant gorilla and a skeletal head beneath a futuristic space helmet. Robot Monster is the Empire's chief enforcer. I would make him about 10 HD, and I'd definitely include his badass death ray attack. If you want to give the Imperial Ape Army a second general, I would probably pick Beast Man from the He-Man cartoon. 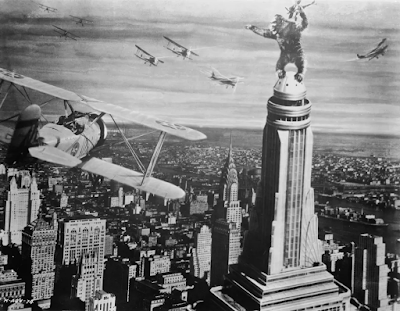 Of course the unquestioned ruler of the Empire of the Apes is King Kong, who rules Empire City from atop his throne on the roof of the Empire City Building. You could use the original version of Kong from the first King Kong movie, or you could make him much larger, like he's been depicted more recently.
I would imagine this King Kong is capable of intelligent conversation when he's calm, and unthinking berserker frenzy when he's enraged. I think he's probably aloof from the day-to-day administration of the Empire though. He's more like a figurehead, maybe even worshiped as a god by the Apes below. He's also the Empire's mightiest champion, capable of laying waste to entire armies of non-god-level beings. (I think each faction has a leader like that. The primary threat to any one of these giant rules would be one of the others, or perhaps PCs who've figured out how to fight a god.) 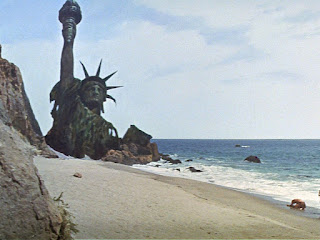 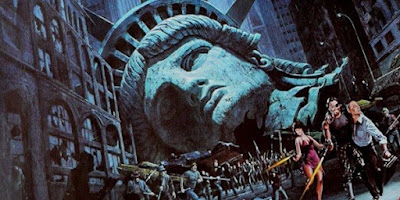 As I said earlier, the Empire of the Apes is centered on the ruins of Empire City, which is basically just New York as it appears in Planet of the Apes or Escape from New York. The Apes maintain the ground level for habitation, but the upper stories of all the buildings are just empty shells with broken-out windows. King Kong probably mostly stays at the top of the skyscrapers while almost everyone else stays down on the ground.
I think there should be several ruined Statues of Liberty around the city. Perhaps a small army of living Statues once attacked the City and tried to expel the Apes, and were defeated and destroyed? Regardless of how they got there though, their severed torsos and heads are major landmarks now.