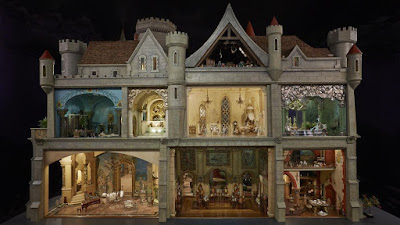 "One of the most popular film actresses of her time, Colleen Moore assembled a legion of her industry colleagues to help craft this miniature home of fantastic proportions. She shared it during the Great Depression, touring the country to raise funds for children's charities."

"From the chapel's floor-to-ceiling stained glass to the flickering of the tiniest lights, every inch on display is a study in artistry and craftsmanship. The Fairy Castle is virtually a museum within our Museum, a collection of miniature treasures in every room, from inch-square books signed by the world's greatest authors to statues nearly two thousand years old. Though the Castle's magical residents are never seen, we know for certain they have exquisite taste." 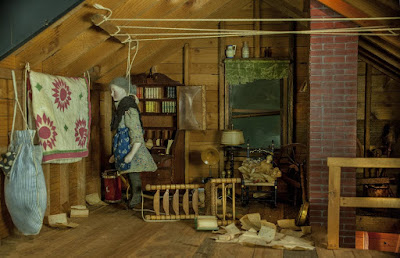 "Frances Glessner Lee crafted her exquisitely detailed miniature crime scenes to train homicide investigators. These dollhouse-sized dioramas of true crimes, created in the first half of the 20th century and still used in forensic training today, helped to revolutionize the emerging field of homicide investigation."

"Lee is considered the mother of forensic science and helped to found the Department of Legal Medicine at Harvard University. At the time, there was very little training for investigators, meaning that they often overlooked or mishandled key evidence, or irrevocably tampered with crime scenes. Lee and her colleagues at Harvard worked to change this. Lee was a talented artist as well as criminologist, and used the craft of miniature-making that she had learned as a young girl to solve this problem. She constructed the Nutshells beginning in the 1940s to teach investigators to properly canvass a crime scene to effectively uncover and understand evidence."

"The equivalent to virtual reality in their time, her masterfully crafted dioramas feature handmade objects to render scenes with exacting accuracy and meticulous detail. Every element of the dioramas - from the angle of miniscule bullet holes, the placement of latches on widows, the patterns of blood splatters, and the discoloration of painstakingly painted miniature corpses - challenges trainees’ powers of observation and deduction." 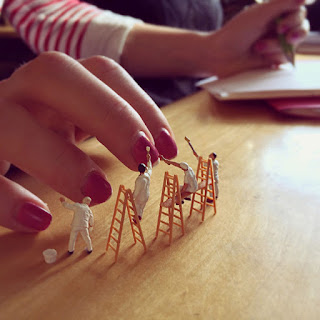 "Sometimes work can be really hectic and frustrating and as grownups, we are expected to be cool about it and keep the whining to ourselves. I work in advertising and my workday is often very chaotic and unpredictable."

"With my iPhone, a reading lamp, and miniature figures, I recreate the imaginary scenes of my honest thoughts in work situations right on my work desk. Pairing each photo with corresponding caption, I post them on my Instagram and Tumblr feeds as a way to document my eventful career. My tiny people are always there making sure I don’t hide my feelings."

"In the 19th century, the railroad was the Internet of its day, connecting people with one another and moving merchandise and raw materials across great distances at unprecedented speeds. As railroad tycoons laid more and more miles of track throughout the growing nation, increasing numbers of citizens were able to witness the spectacle of a steam-engine locomotive roaring through their once-remote towns. In an age when few people traveled farther than 20 miles from their homes in their entire lifetimes, the effect must have been thrilling."

"Naturally, children were eager to play with pint-size versions of this new technology, and 19th-century toymakers obliged, cranking out model trains in wood, cast iron, and tin. By the first half of the 20th century, millions of little boys dreamed of waking up on Christmas morning to find a model train tooting around the tree."

"The problem with model trains in the 21st century: technology. Trains haven’t thrilled us for decades. For most of us, our experience with trains ranges from being packed into a crowded commuter train at rush hour to being stuck behind the wheel of a car at a railroad crossing as miles of groaning gondolas and rattling tanker cars rumble by. For the 21st-century kids stuck in the back seat of that car, trains are noisy, antiquated, and irredeemably boring." 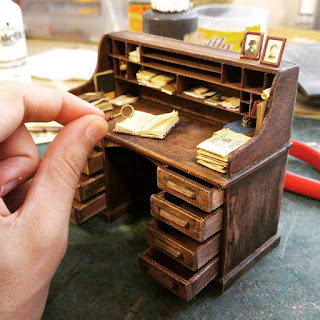 "Ali Alamedy has an eye for detail. The Turkish artist creates delightful miniature dioramas that are filled to the brim with hand-crafted items and absolutely ooze with charm. His newest piece is an adorable recreation of a photo studio from the 1900’s. The tiny photo studio took 9 months to complete, and was built using an assortment of materials such as wood, plastic, copper, and paper. Filled with over 100 tiny, period objects, Alamedy constructed each and every component of the studio from scratch. His time-intensive work manages to stay true to the spirit of vintage photo studios, and overflows with small-scale details that show true appreciation for the craft." 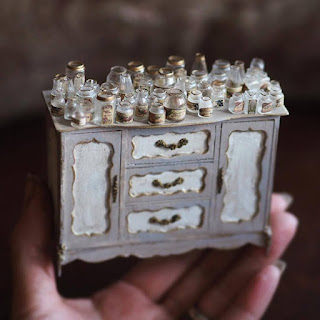 "Japanese artist Kiyomi brings some interior design chic to the world of dollhouses, with a range of handmade miniature antique furniture and accessories. Made from various materials including paper, wire, and perspex, her incredibly detailed, tiny creations include everything you would find in an 18th century world. There’s antique, industrial style cabinets and chairs; haberdashery items, such as spools of thread, sewing scissors, and a vintage sewing machine; as well as little shoes and hats, laid out in a tiny clothes store. There’s even a miniature bakery complete with teeny-tiny pastries." 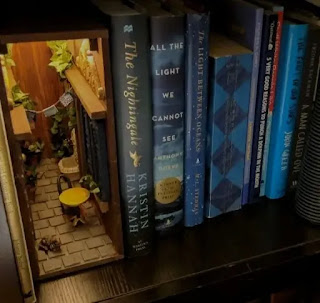 Book Nook Shelf Inserts are Really Cool, and Everyone Should Know They Exist
Christopher Hudspurth
Buzzfeed

If you haven't seen or heard of a book nook before, it's a little shelf insert that goes between books and looks like a tiny door leading to an incredible place, or depicting unique sights.


Notes: My previous miniature miscellany got really positive feedback, and several people suggested additional links to check out. I also realized I'd forgotten my friend Derrick Lin's miniature work. Big thanks to astralbath and bombasticus for their recommendations especially.