My partner and I spent the week at home - working remotely, self isolating, and social distancing. To cheer ourselves up a little in the face of the grim realities of life in the early stages of a global pandemic, we decided to start a campaign using Chris McDowell's Electric Bastionland.

My partner mostly just wanted to play D&D and was pretty open about the rules and the setting. I thought that we would both be more engaged with the game, and distracted from the bad news outside, if we created the campaign collaboratively, rather than if I tried to make everything up beforehand to just tell her at the table.

Emily had already decided that her characters, whoever they were, would be named Jack Kelly and Spot Conlon after a couple characters from Newsies. I decided I would try to draw on whatever I could remember from the French Dispatch trailer as additional inspiration, since it's also about a newspaper.

So far, we've had a short session to roll up her characters, a session to make a borough map, and a few sessions of actual play that I'll detail in a later post. We're setting the game in a fictional Kansas City, and the starting borough is the French District.

Jack Kelly is a charismatic failed Under-Laborer. He knows the secret of whistling to discomfit underground vermin, and wears a pair of tinted goggles due to his sensitivity to sunlight.

Spot Conlon is a dexterous failed Science Mystic. She believes that Truth is hidden in magnetism and she has Foreseen that there is power in the human mind.

The two friends owe a $10 thousand debt to Mr Howitzer, a newspaper publisher and arms dealer who badly wants to start a war that he thinks will be good for both his businesses. He's also a literal cannon with arms and legs who wears a business suit, sash, monocle and barrister wig.

The debt is for the sale of an antique non-electric printing press to Jack and Spot. It's housed in the Barbeque Bottoms district one borough over. Mr Howitzer won't consider even turning over the keys to the building until they've paid down their debt some, but eventually, they should be able to take control of it and start hand-printing their own newspaper.

The pair also has a rival Denton, a failed Newspaper Intern, who now leads a detachment called The Snoozies whose motto is "No news is good news!" and who sell comforting fictions about the state of the world printed on broadsheets once a day. The Snoozies don't like the idea of Jack and Spot printing their own newspaper, but they're also opposed to Mr Howitzer and his sensational warmongering.

Jack and Spot have a couple leads on treasure. First, La Petite Patisserie has noticed some rival sweet stores connected to the Chocolate Factory setting up shop and muscling in on their turf, and Jack and Spot have a tip that they'll pay $1000 to anyone who can manufacture a crime spree to help scare off their rivals. Second, a wealthy shut-in living in the Thundercloud Estate Apartments recently died without naming any heirs. The apartment is locked up pending a visit from the probate court and an estate sale, so there's time to pull off a burglary before the authorities get there.

After considering her options, Emily decided that Jack and Spot would try to scare off the rival sweets shops, starting with the Chocolate Fondue Shoppe. I'll post about those adventures later, but for now, here's the borough map we came up with, following the advice in Electric Bastionland. 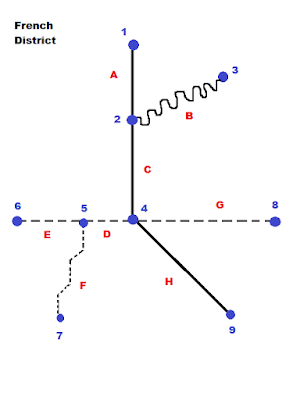 
Emily and I took turns deciding on the different landmarks and inventing potential complications. Almost everything needs more detail before it'll be very usable at the table, several of these elements are barely more than a name right now. But it was enjoyable to make these decisions together, build off each other's suggestions, and create something quite different than I might have come up with on my own.

I've also been trying to use Chris McDowell's advice, about information and choices, about offering Sophie's choices (pick one to save or risk losing both, the same dilemma we confront in triage), about filling the city with people. I've also been thinking of Richard G's advice about how to structure serial adventures for social climbers, and in terms of the travel complications, of Signs in the Wilderness's concept of defining places by their dangers.

One area where I've already "messed up" is in mapping the borough, where CMcD recommends drawing circuits rather than straight lines for the main paths. C'est la vie, it's probably not an over consequential "mistake", and at least I think the current set up feels reasonably like a sprawling American city. I also want to start taking more care to apply the triple rule (that people, places, and objects should have an original purpose, a current purpose, and something unexpected on the side) - I think that will contribute a more distinctive feel as I start laying on details.