Since the holidays, I've been wanting to referee my own game again, and for the last couple months I've been mulling what kind of campaign to run. 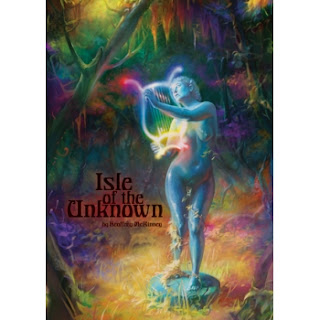 Part of me has been tempted to run a reskinned version of Geoffrey McKinney's Isle of the Unknown. The isle is a tempting target for reskinning. McKinney has divided his island into 6 kinds of hexes - towns (of which there are relatively few), clerics, magic users, monsters, statues, and nature. This straightforward categorization makes it easy for you to keep the same map, and swap out one type of hex for another of your choosing.

The simple way to do this would be to make the swap-outs solely on the basis of the categories. The more complex way would be to note some detail from each original hex, and make sure that the replacement reflects or resembles that detail.

My original plan for re-skinning the island was to replace the towns with the lairs of the islands apex monsters (more on that below), replace both clerics and magic users with the villages of various humanoids, replace statues with ruins (and the statues that animate with active dungeons), and replace McKinney's natural sites with ones that gave the place a new feel.

Gloomtrain considered a similar prospect, and published a series of posts proposing an "Isle of the Undead" that replaced monster hexes with vampires, replaced clerics with undead-hunting crusaders, replaced magic users with necromancers, replaced statues with graveyards, and replaced nature with horticulture. After considering the project in some detail, he seems to have abandoned it, for much the same reason I'm thinking of giving up my re-skin.

I've considered the project in a bit of detail myself, trying to imagine how to replace the original isle's features with reflected counterparts. But there are some problems with map that make it difficult to use this way. First of all, I think it's simply too big. Filling every hex of that space with something interesting stretches the imagination, and seems to have pushed McKinney's random monster generator to its limits. There are over 80 statues on McKinney's Isle, which in my planned version, translates into a lot of ruins and live dungeons. And while the 42 clerics and magic users more or less matches the number of humanoid villages I've settled on, I want a more social game, with a denser population, on an island perhaps ½ or ⅔ the size of the original.

Secondly, I think I want slightly more logic in the placement of the settlements and ruins. I believe that McKinney determined each hex's contents randomly. The result is that several of the supposedly hermetical magic users live right next to a town, or in a virtual community alongside several clerics. You also see some of the weakest monsters in the island right beside the most deadly. And in general, I don't get the sense that traveling further from town, or deeper into the center, brings you closer to danger. Danger and safety appear to be scattered randomly. I think I prefer a little more order than that. As much as I like the idea of a simple re-skin, I don't want this to be the rock that I break my ship on.

So what I'm thinking about instead is drawing my own island map. I want the outline to resemble the Isle of the Unknown in its general shape, and I hope to draw inspiration from at least a few of McKinney's hexes to pay tribute to his book as a source of inspiration. (Although since I hope to referee my first session on Saturday, I might have to start with only a very partial map of the few hexes the players are likely to encounter right away. 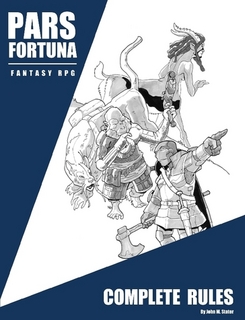 I've also been wanting for awhile now to use Land of Nod's Pars Fortuna to populate a campaign setting. I like the idea of a "non-core" game, where nothing from the "core rules" of whatever system is used, and the setting is filled with people, magic, and monsters that were originally supplemental or peripheral. (I'll probably post about "non-core" gaming again another time. Also coincidentally enough, John Stater reports that he's been thinking about revising Pars Fortuna recently, an idea he possibly started toying with around the same time I started thinking of using it, over the holidays.)

So my plan for the humanoid villages would be to use Pars Fortuna's twelve race-as-classes as the twelve main humanoid factions on the island. These humanoids include large, genderless blue architects, flying psychic koalas, and multi-tentacled alien plant sages. They mostly get along, although there are a few that make very bad neighbors.

The players would all have human characters, although humans are unknown on the island (at least as far as the humanoids are concerned.) I intend to use Dungeon Crawl Classics as my rule-set, although I'm thinking of using Zenopus Archives' OD&D-style human backgrounds in places of DCC's starting occupation list. The human characters would have memories related to their previous lives and backgrounds, but no memory of how they got to the island.

Characters could meet and befriend the local humanoids, explore the weird nature, discover (and kill?) bizarre monsters, find and explore dungeons, meddle in the balance of power between the twelve factions, or try to learn more about the mysteries of the island.

Incidentally, my version would be called the "Island of the Blue Giants" (although those architects I mentioned would insist that the island isn't named for them, and should be called the "Island of the Blue Dragons," after its true masters.) Who are those masters? I mentioned wanting a hex category for boss-monster lairs. Those aren't really "lairs" so much as they are cities seemingly grown from skyscraper-tall crystals somehow coaxed to rise up from beneath the earth.

And who lives in those cities? Every humanoid on the island knows.

Email ThisBlogThis!Share to TwitterShare to FacebookShare to Pinterest
Labels: campaigns i want to run, island of the blue giants