The Ghosts of Tortoises

In a class I took on museum studies, we read Tangible Things, a companion volume to a Harvard University museum exposition of the same name. The purpose of the both the book and the original exhibit is to showcase objects that potentially cross the traditional classificatory boundaries that define the different types of museums, archives, and libraries.

For example, a tortoise shell that's both a zoological specimen and, because it's been carved with graffiti, a historical document from the 19th century whaling industry.

The attention to systems of classification was interesting, but my favorite parts of the book were the 16 profiles of chosen objects. And my favorite of those was the story of the Galapagos Tortoise shell. 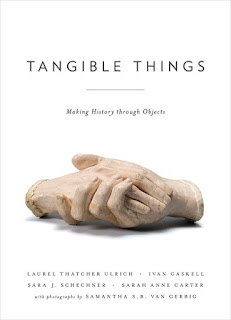 The Galapagos Islands are named for the tortoises, and not, as I had assumed, the other way around.

The priamry human inhabitants of the Galapagos Islands were various kinds of sailors. English pirates used the islands as a base for launching raids on Spanish cargo ships starting in the 17th century. In the late 18th century, the pirates were mostly replaced by British whalers, and after the war of 1812, American whalers were the most common 19th century visitors.

Charles Darwin at tortoise meat, but was apparently unmoved by its flavor.


Sailors carried "small" 75 pound tortoises back to their boats by wearing them as backpacks. Larger tortoises had oars put underneath them and were carried back like a palanquin atop the shoulders of porters, or a coffin being borne by pallbearers.

It was routine for ships to bring hundreds of tortoises aboard on a single visit. They may have removed as many as ten-thousand tortoises per year during the peak of the whaling trade.

Tortoises that were too large to carry were turned into walking signboards by sailors who cut graffiti into their shells, like messages carved on treetrunks.

Herman Melville hunted tortoises while whaling, and wrote a novel about tortoise hunting. Somehow he lost the novel, he rewrote it as a short story, which was published as "The Encantadas".


"The Encantadas" or "The Enchanted Isles" is what sailors used to call the Galapagos. The currents running between the islands are variable, and mist is common, creating the illusion of haunted islands that appear and disappear, or rearrange their locations between visits.

More than going to hell, sailors who had been to the Galapagos feared being reincarnated ... as tortoises.

Later in his life, Melville reported being haunted by guilt over tortoise hunting, and being unable to stop himself from imaging tortoises following him wherever he went. The ones he saw in nature, in parks and gardens, mostly made him sad, but he was terrified of the ghostly visions of tortoises he saw emerging from the shadows at parties in rich people's houses.

"Such is the vividness of my memory, or the magic of my fancy, that often in scenes of social merriment, and especially at revels held by candle-light in old-fashioned mansions, so that shadows were thrown into the further recesses of an angular and spacious room, making them put on a look of haunted undergrowth of lonely woods, I have drawn the attention of my comrades by my fixed gaze and sudden change of air, as I have seemed to see, slowly emerging from those imagined solitudes, and heavily crawling along the floor, the ghost of a gigantic tortoise."

Email ThisBlogThis!Share to TwitterShare to FacebookShare to Pinterest
Labels: monsters i want to fight